Thank you Jack and the Noe Valley Voice for a sweet article on Nomad Rugs! First published in 1977 the “Voice” (as we locals call it) has been writing about the hyper-local Noe Valley scene for over 40 years! Really appreciate this nice coverage! Chris

Art You Can Walk On

Stepping into Nomad Rugs, one is presented with a rich forest of color and texture given off by the many rugs hanging from the walls and in orderly piles on the floor. The environment invites a lingering exploration of patterns both modern and antique and colors of every hue.

Located on the quiet shady side of 24th Street near Church Street, Nomad Rugs is owned and managed by Christopher Wahlgren. After getting a humanities degree at San Francisco State, Wahlgren considered further study of the decorative arts or interior design, but during a trip to Turkey he met an antique rug collector who introduced him to some Turkish dealers. Wahlgren’s love of the artistry of oriental rugs started there.

From his apartment garage at 24th and Guerrero streets, Wahlgren sold his first hand-woven Oriental rugs in 1995. He called his sales Chris’ Bazaar. He was waiting tables at the time, and his first client was the owner of the restaurant where he worked.

His current inventory numbers 1,000 rugs, all of handspun wool and most us ing natural plant and mineral dyes. Each knot of the rug is tied by hand, averaging 100 knots per inch. A small percentage of his rugs are made with silk or have silk highlights. The rugs come from cottage industry producers, often done in the homes of individual families.

“Color is often more important than design,” Wahlgren says. “Color is really important in a personal way. It’s what we most respond to. Soft blue and gray have been popular colors in the last two years.”

Most of the rugs at Nomad are colored in the traditional way with natural plant and mineral dyes. “Natural dyes have more depth. They have more variation and are more pleasing to the eye,” Wahlgren asserts.

About 75 percent of his rugs currently come from Afghanistan. Others originate in India, Pakistan, and Nepal. Some are commissioned designs. “Often we’ll take antique folk designs, make some slight changes, and order them,” he says.

“Noe Valley has been a great place to have a business. The folks in this neighborhood have always supported us. Though we have customers from all over the Bay Area and online, most of them live within two miles of the store.

“I’ve been doing this for more than half my life now, and I’m still not bored. Rugs are still fun and exciting to me. I like coming to work and opening the shipments, and that’s probably the greatest gift one can have.” 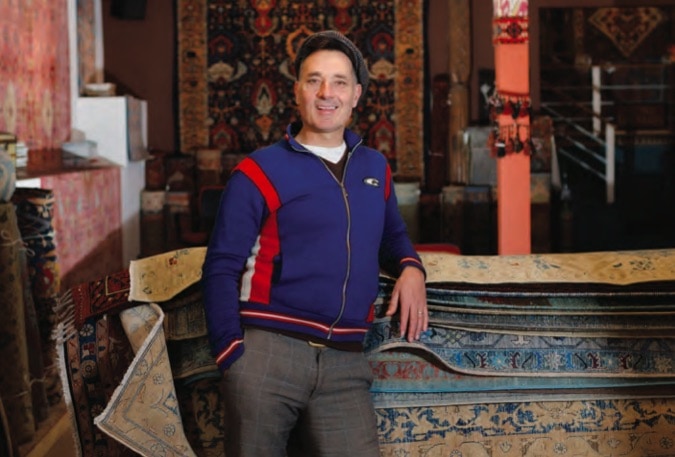